If you have been waiting for the release of Yeezy Season 1, the wait is officially over!  Now you can shop the men’s ready-to-wear, women’s ready-to-wear, and the Yeezy 950 Boots in stores!  The rapper, who has conquered the music world, is now moving over to the fashion world with his Adidas Originals Collection.  We got a sneak peak of the collection during NYFW, February 2015.  The collection is heavily influenced by Kanye’s love for grungy street style and neutral colors with the occasional camouflage piece.  The price point is on the expensive side with crop tops retailing at $210 and shredded sweaters retailing at $2,600.

If you’re confident enough to pull off sheer pants, or stockings, and a bodysuit, then you will definitely enjoy Kanye’s line.  During his show for NYFW in February, Kim Kardashian West sat front row decked in a Yeezy Season 1 bodysuit, tights Camouflage jacket and crop top, while his sister in law, Kylie Jenner, appeared in the show in a similar outfit.

Take a look at the collection below.  If you’re interested in purchasing, visit Barney’s in store and online.  You can also visit Adidas.com.   Now that we see what the hype is about, who’s ready for  Season 2?! 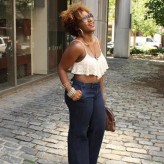 Freelance writer, fashion enthusiast and owner of MarshBar's Closet, Marsha Badger offers her spin on what's trending in the fashion industry. The Brooklyn native specializes in showing you how to look good for less. Specializing in event coverage, celebrity interviews and guidance on how to recreate celebrity looks, Marsha proudly contributes her insight to Kontrol Magazine.

How To Get Your Brand Involved In Fashion

Are You in a Codependent Relationship?