Scott Disick never learns and Kourtney Kardashian apparently never tires of his antics. Well nothing is new, not even Kourtney’s reported anger over his latest indiscretion. However, there is a new face involved, Scott’s ex-girlfriend, Chloe Bartoli. Just yesterday to the two were spotted on the beach of Monte Carlo, France displaying some serious PDA. Look below and you will see them canoodling like some happy couple. They are cuddled up on in a chair together, touching and rubbing each other in various spots, and feeding one another at a restaurant. How many f****s does Scott give about who sees? ZERO! 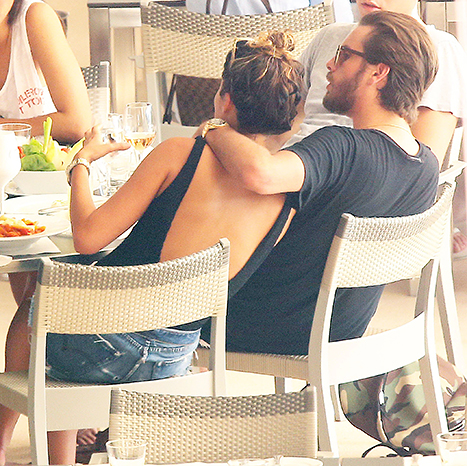 A source close to the “Kardashian Kamp” gives the details on Kourtney’s current mood:

Kourtney is once again embarrassed by Scott’s behavior and she has been made aware of these pictures. She is absolutely livid with what she has seen…Her mind is racing on what else could be happening. Scott breaking her heart isn’t anything new, but this latest issue has her very upset and not sure what to do. She is shellshocked by it.

It is not hard to sympathize with the eldest Kardashian, especially when you think she has three children with him, with her youngest, Reign Aston Disick, is only a few months old. Still you feel like she did it to herself. Scott has been traditionally grimy to her on the show and there appears to be no love gained or loss between the couple over the years. They do not even sleep in the same bed together and still have no plans to get married. Scott has some explaining to do, but we are sure Kourtney will take him back.

An even more interesting question is who is Chloe Bartoli? Apparently she is one half of a celebrity stylist duo with her twin sister, Marielou. Her clientele include Selena Gomez and Nicole Richie. Thus, she knows a lot of famous people. Perhaps that is how she met Scott. Find a man of your own Chloe! When it comes to the beauty and fashion industries any member of the Kardashian-Jenner Clan can end your career. Scott is not worth it, and he’s definitely not smart enough to stay a kept man! Kourtney I am single!

Yes! Issa Rae To Voice Spider-Woman in “Spider-Man: Into The Spider-Verse 2!”